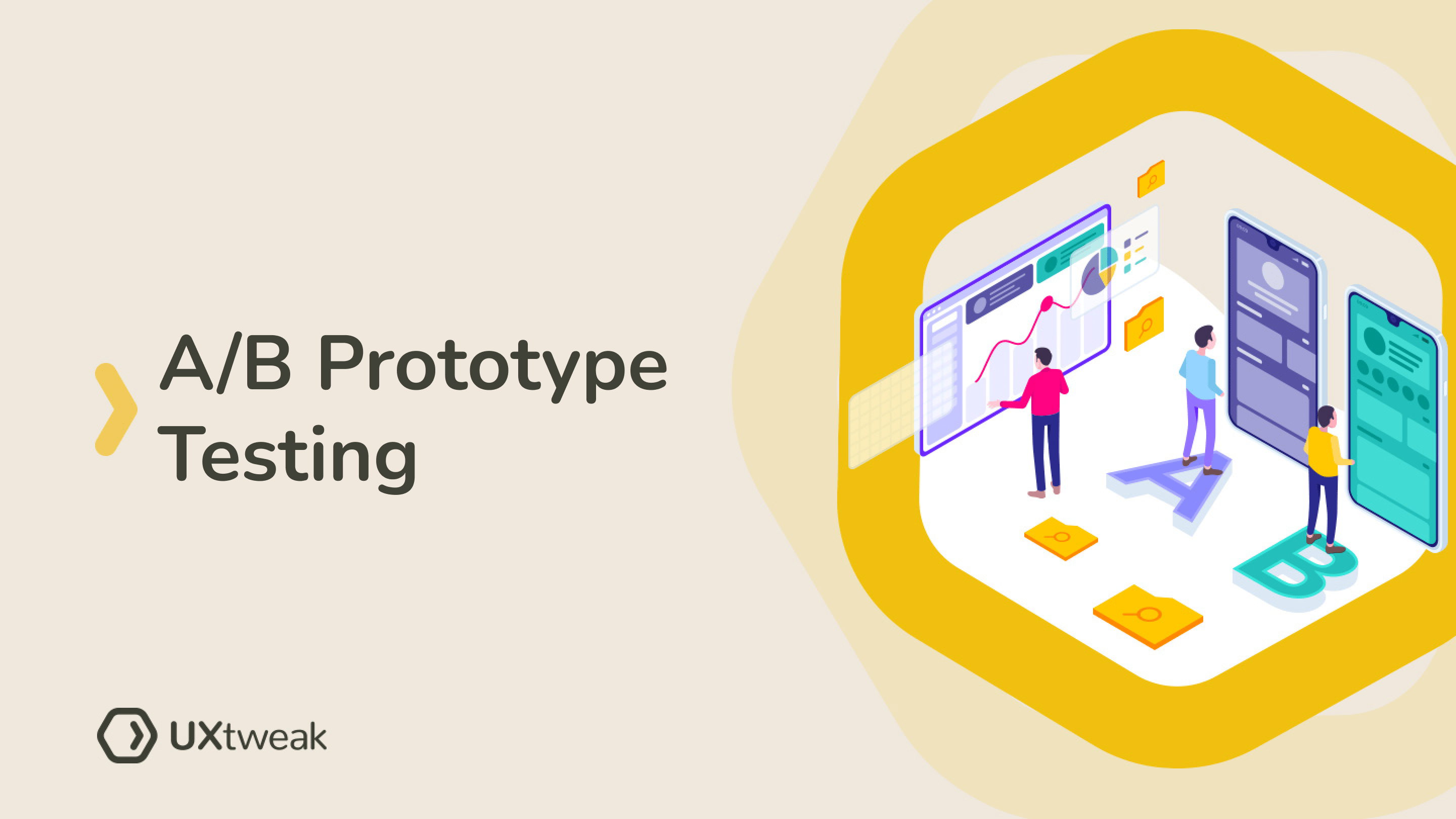 In this blog, we discuss what A/B testing is, why it's useful and most importantly, how to conduct an A/B testing of your own Figma prototype, all with only one UXtweak Prototype Testing study.

So you are in the middle of your design process and have arrived at a tough decision. You have two distinct designs for a certain flow ready, however, you aren’t sure which one will perform better.

Then you have come to the right place!

In just a few minutes of your time, we will take you through an example of A/B testing with the tool Prototype Testing in UXtweak. Read further and you’re sure to become ready to A/B test your prototypes yourself.

What is A/B testing?

A/B testing is a research method in which you take two alternative designs of your web/app or other designs and pit them against each other to see which one performs better in the context of the user approaching a chosen problem. Typically, you would split your respondent base (who could be your current users, your potential clients etc.) and show each respondent either the design “A” or the design “B” (hence the name of the activity).

Afterward, you use statistical methods to determine which design performed “better”. It’s entirely up to you what metric to use when determining which design performed better. It could be the conversion rate on your website or – as in the case of our example below – the reduction in lostness when trying to solve a specific task.

If you prefer video content you can watch the recording of our webinar. Where we talk about A/B testing on a specific example, give useful tips for proper analysis, and generally have an informative conversation.

In our case, we decided to A/B test a simple mockup of the homepage of “EASY Designer”, which is an online design tool website. We aimed to add a way to contact the support via a simple contact form.

We came up with two alternatives on how to allow the user to find the support form from the landing page.

The first alternative – Variant “A” – simply adds a “Help” option to the top navigation bar: 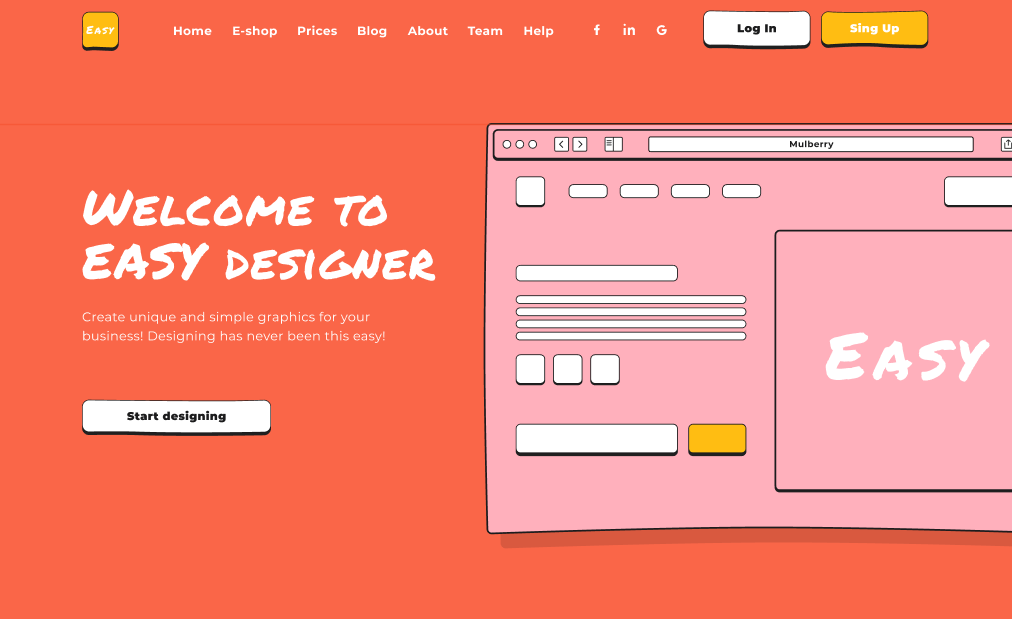 The second alternative – Variant “B” – adds a call to action button with a question mark label to the bottom right corner of the landing page – a typical location for support chat widgets: 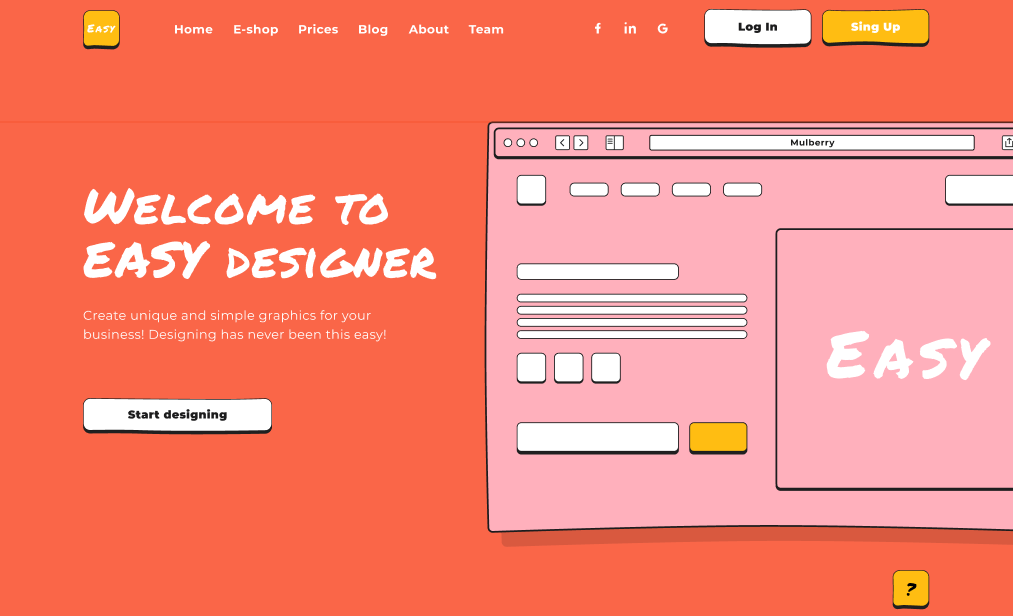 In our Figma prototype, we created equivalent flows with both of these variants, which included pages for each of the navigation options from the landing page, to the contact form ,with the necessary steps in-between all also included.

When creating this Prototype in Figma, it’s necessary to:

To make sure your study is setup properly for the A/B testing you need to follow these steps:

If you’re unsure how to use the share link, check out out documentation here. We used the One-to-one mode for Figma, however for the purposes of this example, it’s not that important which mode you select.

We used the following text for our study:

“A/B: You have been using the EASY Designer platform for some time. This month, you were not able to find the invoice for your subscription. Contact the support, provide them with your name, email address and the reason for contact. All text fields are automatically filled after you click on them. Once you fill in all the information, don’t forget to send the form.”

3. Choose the starting and ending designs.

You need to set where the participant begins each task and where the task is considered to be successfully completed. Remember that one task must start and end in the “A” variant while the other must start and end in the “B” variant. Since we consider the task completed successfully as long as the participant managed to contact the support regardless of their exact path, we didn’t choose the “Full path match” option.

Remember that the point of the A/B testing is to show only one variant to the user, so they can’t be influenced by having already seen the other variant. To ensure this, you need to set up your task options to randomize the task order and to show only 1 task to your user. 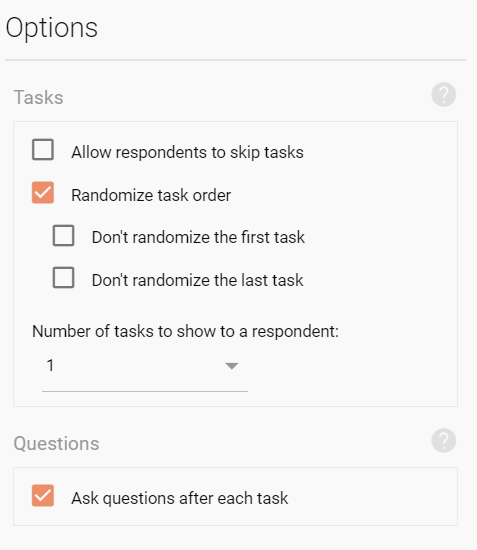 The option to allow respondents to skip tasks is primarily there for long and complex studies, to allow the participant to get on with the study even if they get stuck during one task. Using it in our case would not have much of a point.

5. Add pre-study and post-study questionnaires to gather additional information from your respondents.

We chose to ask about their gender and age in the pre-study questionnaire to see if there is a difference in performance of the alternative designs based on the demographic of the respondents. If the system you’d like to A/B test is for different kinds of people, you may want to write questions to distinguish them too. In the post-study questionnaire, we also asked respondents to evaluate if the task was complicated to further compare the performance of the design variants.

6. Add a screening question to target your exact audience. If necessary

Since entropy has a lower impact the more respondents you have – for example, the randomization of two tasks is more likely to be close to 50% when you have a larger pool of respondents, we’ve decided to recruit 50 respondents to account for this and get results with more even distribution. We used the UXtweak User Panel to recruit the respondents we needed. We decided to target US respondents only.

For your own A/B test, always make sure that you are recruiting your real target audience. Otherwise, your testing could prove to be pointless and a waste of your money.

The first and most obvious result to compare between the two variants was the success rate. Success is determined whether the participant ended the task on the right “page” of the prototype as you’ve determined in setup: 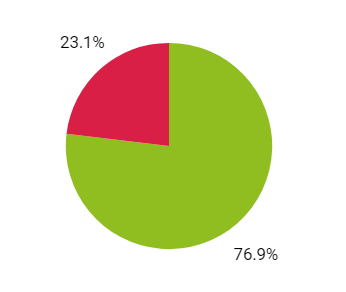 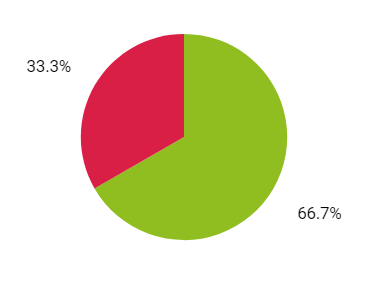 As we can see the general success rate was higher when the variant “A” was used.

However, we decided to delve deeper into the results to make sure the variant “A” is indeed performing better than “B”. We analyzed several complementary results, which are grouped in the table below: 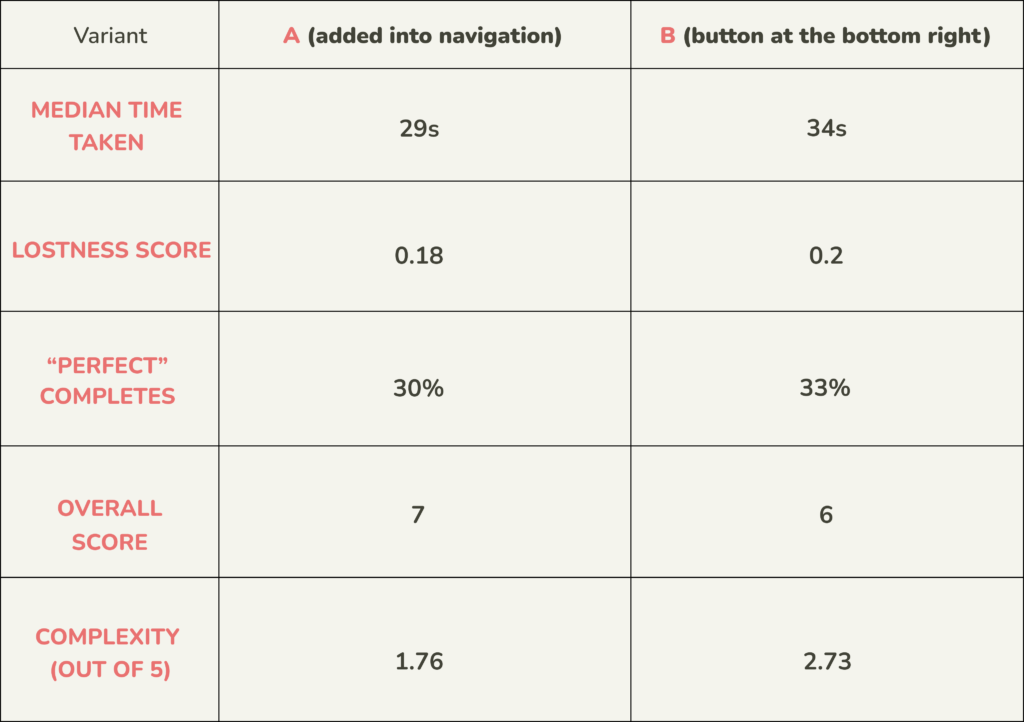 As we look at the additional information we were able to gather from the study, it was confirmed that the variant “A” performed better overall.

The respondents on average needed less time to complete the task – Median time taken.They needed to go through less screens – Lostness score (the perfect lostness score is 0, the closer the score is to 1, the more lost was the respondent). The overall complexity of the task based on the results was lower – Overall score (10 is a perfect score) and the respondents themselves explicitly evaluated the task as less complex – Complexity (out of 5).

The last information we analyzed was the success rate of the variants on our primary target audience. For the purpose of this example we chose the age group of 26-35 as our main target audience. In order to focus on these respondents and check the results for them only, we simply used the filter in the Respondents section of results to select all those of the other age groups and remove them from the analysis:

We then recalculated it and arrived to the following success rates: 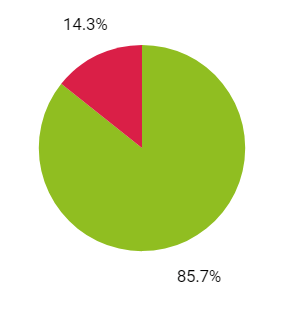 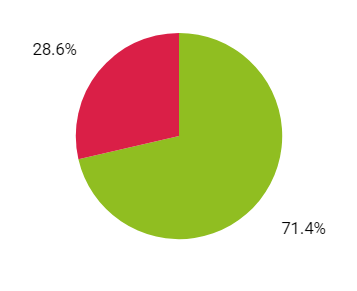 This was the last confirmation we needed before definitely proclaiming the variant “A” as the better performing one. If you would like to analyze the results even deeper, you could recreate the table we showed above with the filtered respondents.

Advantages and disadvantages of using only one study

It’s important to note that this is not the only way you could conduct the Prototype A/B testing with UXtweak. Similarly to any other tool on the platform (each of which can  be used for different kinds of /B testing in their own right), you can run an A/B test using two separate studies.

To better understand when to use which option, we’ve put together the most significant pros and cons of the single study approach here:

Now you know how to prepare your prototype for A/B testing with UXtweak Prototype Testing tool and how to analyze the results afterward! Here are some of the most important points to note:

UX researcher @ UXtweak. Loves learning new things and passing them on to others. 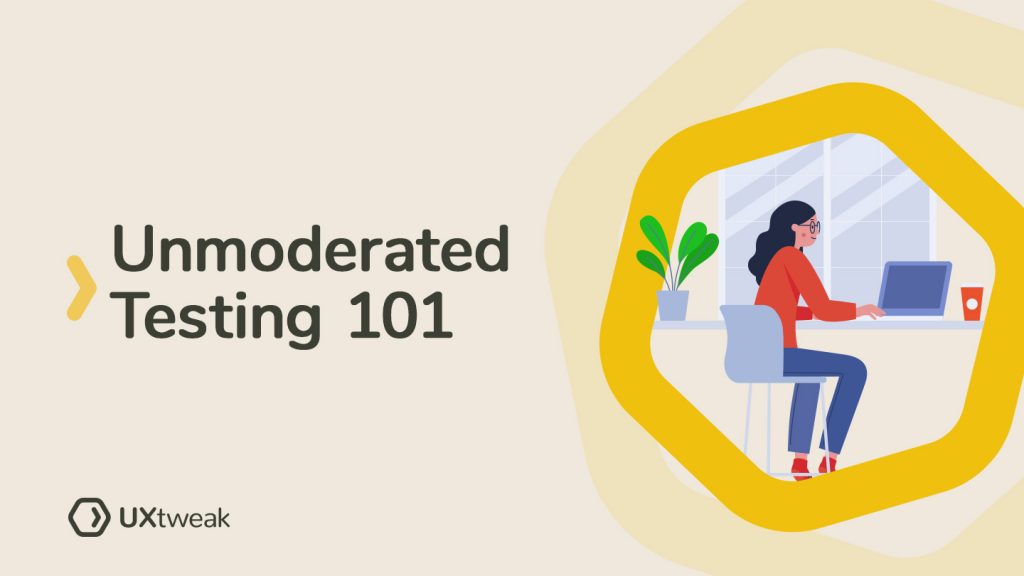 This article will introduce you to the basics of Unmoderated Usability Testing. We will explain why you should conduct such testing, how to prepare tasks, or how to recruit the right participants. Read more ... 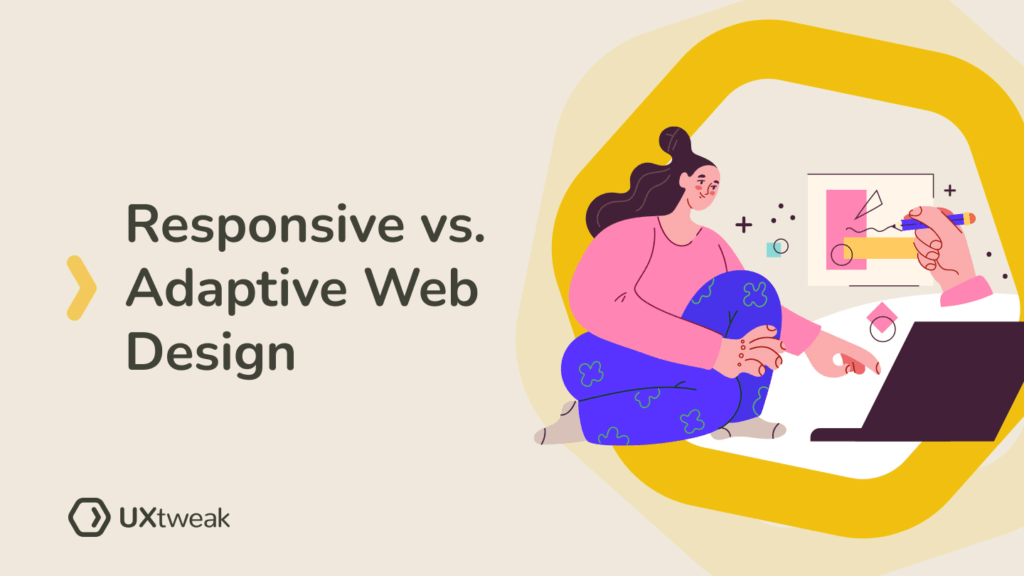 UX Tips Responsive Design Vs. Adaptive: What to Consider When Choosing 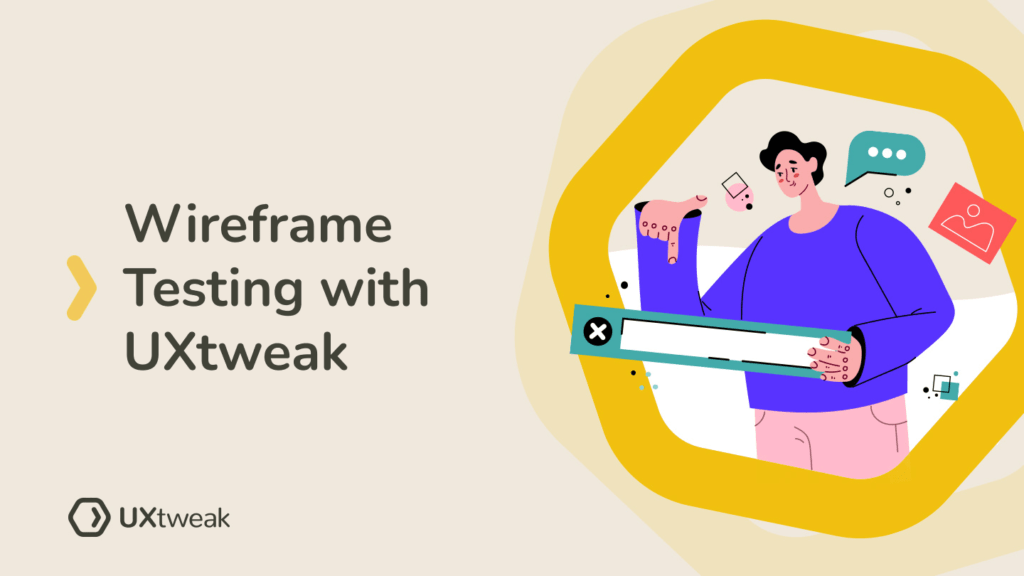 In this article we are going to show you how to conduct wireframe testing with UXtweak, what tools and methods to use and some of the best practices. Read more ... 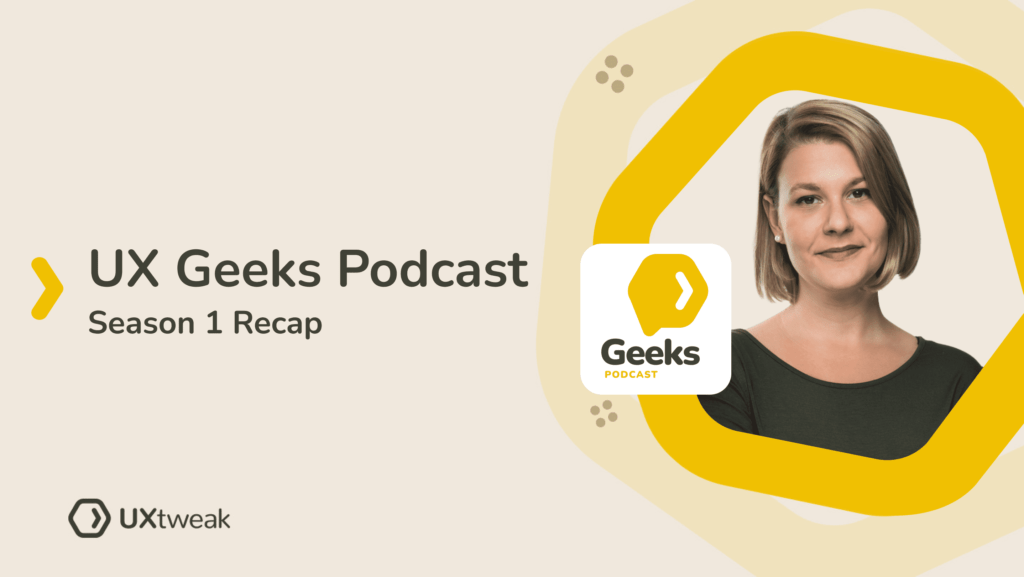 Season 2 of UX Geeks is right around the corner so we decided to make a little recap of all the insights gathered in Season 1 so far. Let’s have a look at some of the most memorable moments of the past 12 episodes! Read more ...